It’s been pretty quiet here on the blog front over the previous weeks; my Spring, Summer and Autumn consisted of me either learning to paraglide, going on backcountry mountain bike rides, or running NZByBike.com. I’m stoked to finally get a post up, and couldn’t be happier to give my good mate Bruce a chance to plug some out-of-the-way New Zealand destinations you’ve probably never heard about.

I know many of you are independent travellers looking to get off the beaten track, and these 7 spots are sure to blow you away — whilst also letting you escape the crowds. And for those of you looking for a nurturing hand on your New Zealand backpacking adventure, check out the guided trips with Real Kiwi.

Situated on the west coast of the South Island, near Franz Josef, Okarito is situated adjacent to a lagoon full of wildlife and a spectacular ocean surf beach. Since it is situated at the end of a road with no exit, it doesn’t get the main highway traffic passing through as the 20km diversion off the highway is enough to dissuade most travellers.

Here there is a Department of Conservation campground, a small resident population and many cribs (holiday homes). It’s also the site of a kiwi breeding program where you can do ranger guided night walks to see them – an experience that in itself is pretty rare in NZ. The rare Kotuku (White Heron) nests in New Zealand in the trees surrounding the Okarito lagoon, the only place in New Zealand where they breed. You can take guided lagoon trips to see the herons and various waterfowl that inhabit this rich eco-system. 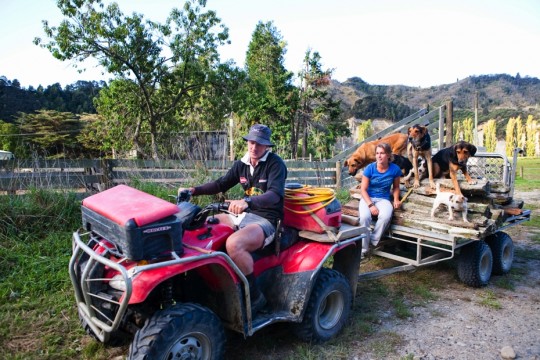 Deep within the rugged Whanganui River country of the central North Island is a place called Whakahoro, and the location of Blue Duck Station. This part of the country is definitely off the beaten track – you wouldn’t travel through here unless visiting for a purpose.

Blue Duck Station leads the way as a joint farm and tourism business with a guiding objective of running their own conservation projects to protect local wildlife. The rare endemic Whio (Blue Duck) lives on the rivers in the bush covered valleys, and is susceptible to the introduced pests like stoats. There’s comfortable accommodation of varying standards and opportunities to get involved with the conservation programmes or other activities like horse riding and clay target shooting when you stay here. 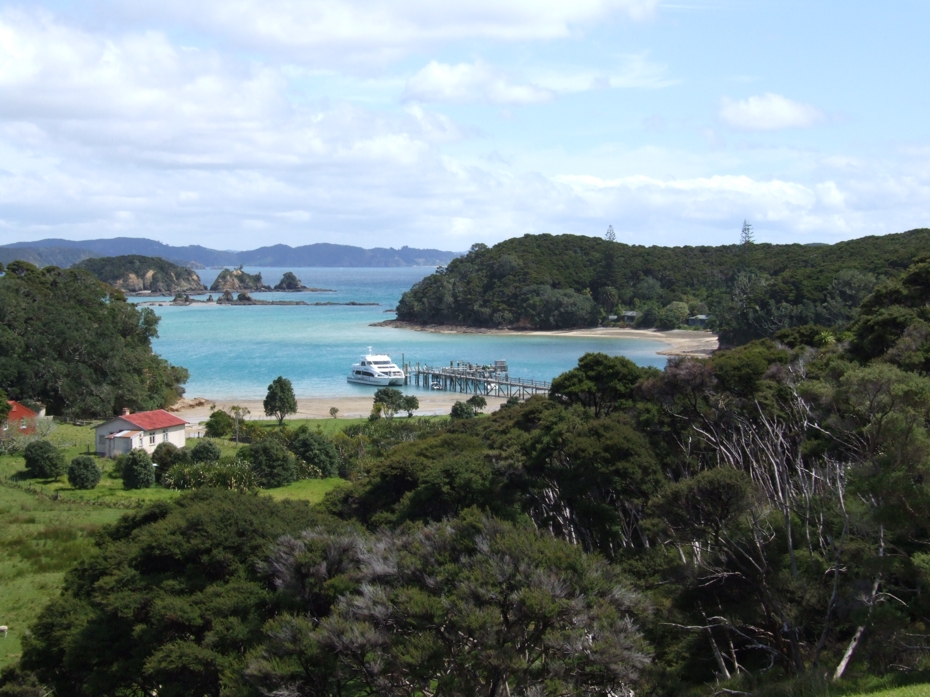 The Bay Of Islands, north of Auckland, is a well known tourist destination and has been since the earliest European settlement. Most tourists visit the historical points of interest at the waterfront towns of Paihia and Russell. Most will also probably do a cruise out into the bay. Not everyone will visit Urupukapuka Island, however.

The island name might not be familiar but it was the home island of the popular big game fishing evangelist, Zane Grey. The island is not only a jewel in the bay but also has rich Maori history and settlement – not to be missed when you’re in The Bay.

Sure, it’s not the most inventive name. That’s maybe why most people drive past it and don’t stop here for the night. This small town sits on the central plateau of the North island in the shadow of Mt Ruapehu, Mt Tongariro and Mt Ngaruhoe. The town takes its name after the Tongariro National Park which it sits on the edge of, on the main highway between the larger Turangi and Ohakune.

It’s the closest town to the Whakapapa ski field and finds itself at one end of the Tongariro Alpine Crossing walk. This walk might be a reason you end up staying in National Park, but to visit and be close to the totemic mountains is enough of a reason as well. 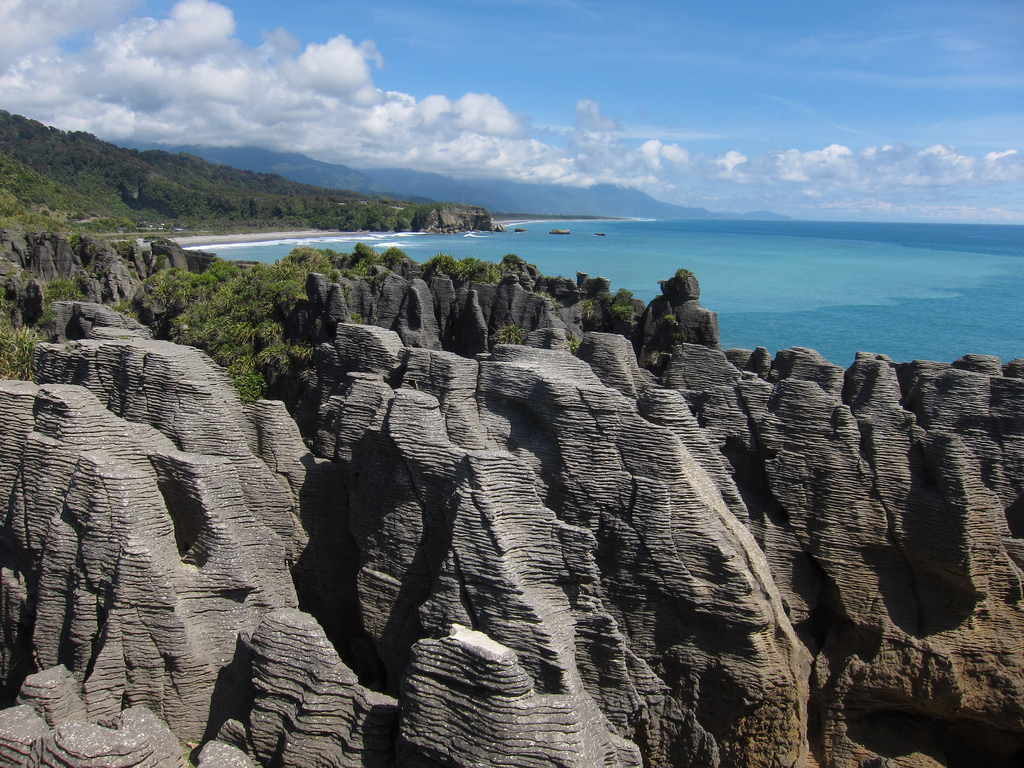 Most people only skirt the edge of this park as they travel down or up the West Coast of New Zealand between Westport and Greymouth. This coastal park is renowned for the Pancake Rocks and blowholes that are found on the coast. It’s a bit more effort though to enjoy the fringing coastal forest.

This temperate forest has an almost sub-tropical look and feel due to the Nikau palms, ferns and larger red-flowering Rata trees. The land is is limestone karst in formation which are eroded by heavy rains that occur here into canyons and caves. This in turn creates unique habitats and a network of tracks for foot and bike which allow visitors to explore the interior. 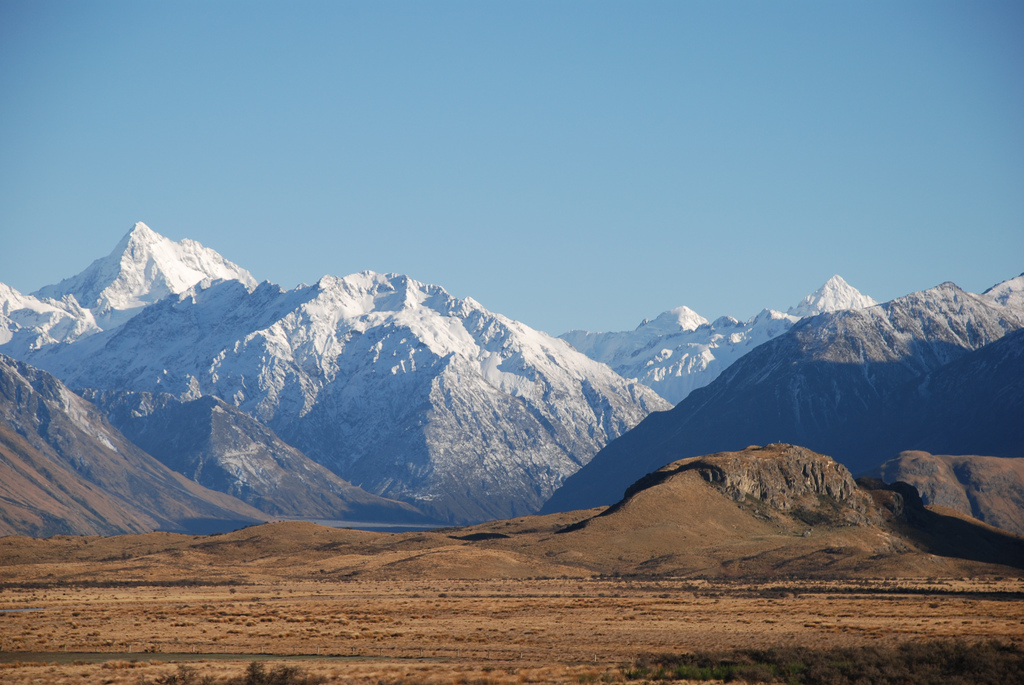 The braided river beds of the Rangitata River reflect the ancient erosion of the Southern Alps as rain and snow melt flows from these imposing slopes. Not only does the river bring nutrients to the lower flatlands of the Canterbury Plains, but the river also creates the perfect conditions for excellent whitewater rafting.

The high country on the eastern side of the Alps is iconic as it is unique in New Zealand. The sparse and steep tussock brown hillsides are mainly grazed by the hardy merino sheep. This landscape of exposed ridge lines, and rivers and big skies is a distinct contrast to the green hues often associated with New Zealand. 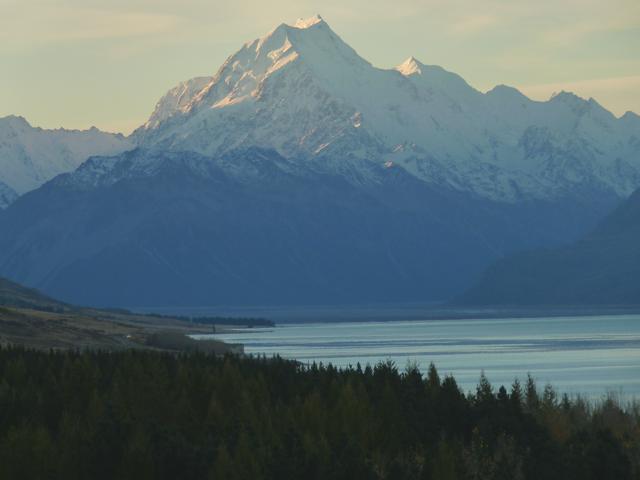 To drive along the turquoise blue shoreline of Lake Pukaki on your way to Mt Cook village is to enjoy the splendour of the high country of New Zealand without an ounce of effort. If the words “picture postcard” are to be used correctly at least once then they are well used to describe the imagery of the lake in the foreground with New Zealand’s highest mountain, Aoraki (Mt Cook) rising above in the distance.

This lake is man-made to create a resource for hydro power generation. The colour of the water is a result of the fine glacial sediment that has been eroded into the water that feeds the lake. You don’t need to understand the science, just go, stop, contemplate and enjoy.