Sweden's riots: Is the integration of immigrants failing? 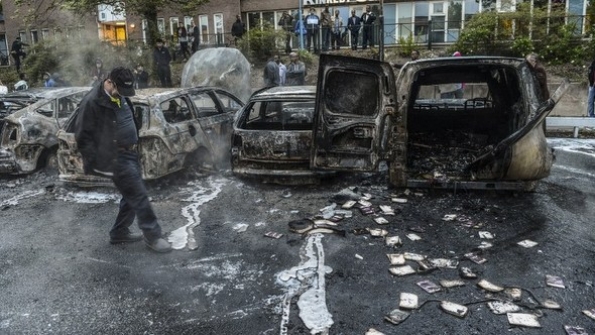 HUNDREDS of cars set on fire, a school in flames and angry youths hurling stones at the police. This is not the banlieue in France but suburbs in supposedly peaceful Sweden. Six nights of arson and violence in Stockholm’s poorer suburbs, where a majority of residents are immigrants, have shaken the Nordic country and created international headlines.

For much of this year, discrimination of immigrants and racism have been hotly debated in a country where 14% of its 9.6m people are foreign born. Now the riots could make immigration and integration the pivotal debate in Swedish politics.

On the night of May 24th cars were set ablaze in several Stockholm suburbs but fewer incidents were reported compared to previous nights. Instead, unrest spread to other towns, including Örebro, 160 kilometres west of Stockholm, where masked youths threw stones at the police and damaged a police station.

The riots, which started in the suburb of Husby, are not as violent and widespread as those in Paris in 2005 and in London in 2011. But the quickly spreading rioting has shaken local residents and politicians, putting a spotlight on what many see as a long-time failure of society to integrate immigrants.

In suburbs like Husby unemployment is more than double the country’s average, income much lower and residents complain of being neglected by politicians. Although Sweden is still one of the world’s most equal countries, recent reports by the OECD, a think tank, show income inequality is on the rise.

Many say anger over a fatal police shooting of a 69-year old Husby resident this month triggered the unrest. Others claim the rioters are trouble-makers just looking for an excuse to fight. Some of the young men arrested during the riots have criminal records.

Fredrik Reinfeldt, the prime minister, has condemned the violence but offered no new solutions for the suburbs. Immigration and integration are highly sensitive issues in Swedish politics. There is broad popular support for helping refugees. In 2012, 44 000 asylum were accepted from countries like Syria, Afghanistan and Somalia, making Sweden of the world’s most welcoming countries for asylum seekers. Earlier this year there a public outcry erupted when it was revealed that police tried to track illegal immigrants by randomly asking foreign looking people to show their ID-cards.

Even so, resentment against immigrants is growing.  Sweden Democrats, an anti-immigration party, which shocked the political establishment by winning 5.7% of the vote in the 2010 election (and for the first time getting seats in parliament), has steadily gained ground. It was Sweden’s third most popular party in a May poll by Demoskop, a research institute.

Sweden Democrats blame the riots on what they say is an “irresponsible immigration policy creating deep cracks in the Swedish society”. Jimmie Åkesson, the party leader, has called for a parliamentary debate on the unrest and mocks those who believe in dialogue and more resources to the suburbs. “These cracks will not be fixed by more youth centres or by police grilling sausages with teenagers”, he writes on the party’s website, saying less immigration is the only solution.  National and local elections next year will reveal what voters think of his advocacy of pulling up the drawbridge.