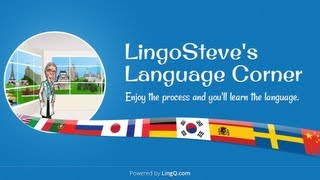 Steve Kaufmann about himself and his language learning method:

“Until I was 17 I only spoke English. I had studied French for 10 years in school but I could hardly say a thing. It was then that I realized I would never learn using traditional methods. So I developed my own methods for language acquisition, which you can now use to learn English online.

Everyone is capable of becoming fluent in a second or third or ninth language! I will show you how to unlock the ability all humans possess to communicate in whatever language they choose. My system works! I have proven it and our LingQ Members continue to prove it every day.

I don’t have a magic potion or a secret formula but I have developed the most efficient way to learn languages and it doesn’t include classrooms and memorizing grammar rules. All you need is the desire to communicate and the right system.”

The Seven Secrets of Successful Language Learning: #1 Spend The Time