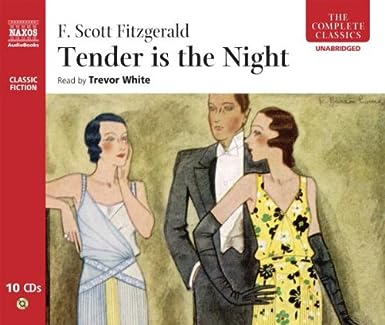 Thought provoking and brilliantly written "Tender is the Night" etches itself into your brain: once read, never forgotten. Longer, looser but more complex and much darker in its subject matter than "The Great Gatsby", Scott Fitzgerald similarly transcends time & place to leave you with quite unforgettable images. For example, describing an open-air dinner party on the Cote d'Azur he writes: "There were fireflies riding on the dark air and a dog baying on some low and far-away ledge of the cliff. The table seemed to have risen a little toward the sky like a mechanical dancing platform, giving the people around it a sense of being alone with each other in the dark universe, nourished by its only food, warmed by its only lights." And, thirty years after first reading that wonderfully evocative description, it's still there: burned-in as a reference-point that follows me around all open-air late night parties... just waiting for that distant bark.

Replete with similar passages, "Tender is the Night" juxtaposes romantic idylls with the personal tragedies surrounding most of its characters, and, in so doing, triumphs in exploring the differences between perception and reality, superficiality versus excess, strength of character versus fear & weakness, and uncontrollable madness versus self-induced self-destruction. Drawing you into a hedonistic world that you would sincerely wish to be part of and then exploding its deficiencies in front of you, it leaves you realising that not all is what it seems.

Closing with a superbly structured final paragraph that ranks as one of the most effective I've ever read - bringing together everything that the book seeks to explore in a few cogently dismissive and understated sentences - this is writing at its very best: compelling, perceptive, complex, timeless and, beneath its superficially "glossy" exterior, very true. If you haven't read it do: it's one of the best books out there.